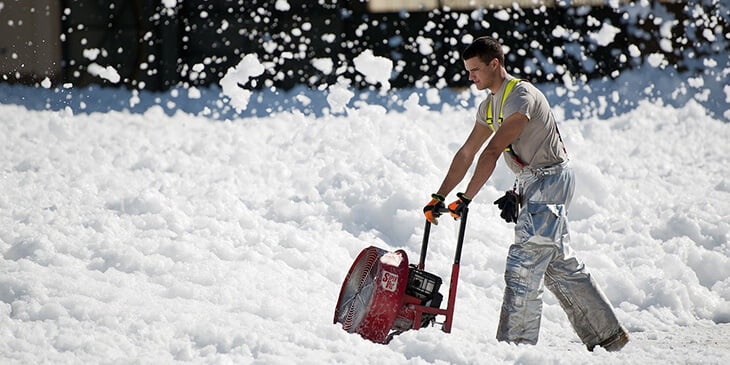 Every year, thousands of people suffer injuries while shoveling snow. Some of these people shovel snow at the wrong time and end up at the hospital. The case of people dying when they are shoveling snow is not strange because it happens often, especially during blizzards. It is not a small feat shoveling snow if you do not know where to begin from or how to carry about it. If you are not in good shape, it is recommended that you meet someone who will do it for you. However, if there is no one you can call to support you, you should shovel slow and steady. Short breaks are also encouraged while shoveling too.

When is the Best Time to Shovel Snow?

It is good to shovel very early in the day and it should be done often to prevent snow from building up. When you have a low snow level around, the sun can easily melt it immediately the storm is over.

You should not start shoveling immediately after smoking or a meal. The reason for this is because the blood is what will be used to help in the digestion of food and also, the nicotine constricts the blood vessels. You should shovel straight ahead and shovel to one side. It is not going to be a good outing if you start tossing a heavy load of snow over the shoulder.

Before people start heading out for work or when people have come home in the night, it’s generally a time when people shove. Though, it is not everyone who is ready to shovel snow at those hours. After a snow storm in the night, the next morning should be the right time to shovel because the snow will be fluffy and light.

What to Wear And Shove

Frostbite is no respecter of any age or gender, it is out to destroy people’s bodies. When it comes to shoving snow, you should be fully covered with warm socks, winter hat or gloves. Getting exposed to bitter cold for a long time may not be good for your skin cells.

The body tends to dehydrate when it stays out long without properly covered. The extremities like the ears, toes, and fingers are most affected first before the parts of the body.

It does not matter when you want to shovel snow, the topmost priority is your safety, which is closely followed by efficiency and comfort. These are things you should consider before shoving.

Things to Remember While Shoveling Snow

You should not forget these ideas when it comes to shoveling:

You should learn to blend the knees while the legs are lifted. The shovel should be kept close to you as you lift the snow. It will prevent or reduce the risk of back strain. The hands should be used one after the other to ensure that the whole muscles are working. The grip on the user’s hands should be changed once in a while.

Tips for Snow Shoveling in Driveway

You can save yourself trouble and precious time when you are shoveling in a driveway. The path to the door leading to the driver’s seat should be cleared first. When you get inside the car, the first thing that you should do is to turn on your defrosting mechanism. The heat should be cranked full time even when it looks as if it is only cold air that is coming out. The process is to fully warm.

The best time to shovel snow depends also on when you are active to do such activity. When you shovel snow, the environment is able to disperse the heaped snow within a short time. However, it is difficult to shovel snow when it must have become challenging because of the snow level around you.